skip to main | skip to sidebar

3 Ways to Get Unstuck

We've all been at that point where you know, long term, where the story is going but between you and long-term, there is a vast wasteland of white page and you can't get word one written. What to do? Here are three things that might work.

1.Get to the action.
Right to it. Your current chapter ends with the action looming on the horizon and you're dying to get to it but there's all this other "stuff" that has to be explained and set-up and prepared before you get there. You know what? You're probably going to wind up cutting all that stuff anyway, so why not skip it now? Get to the part you're dying to write. Now, I'm not a fan of writing the action scenes and stitching them together because those winding paths between high points can take you in some interesting directions, but if you're itching for action, your reader probably is too.

2.Start a conversation.
When you're stuck in a plot line, your wheels tend to spin. You want forward motion but everywhere you look is nothing but mud and walls and plot-drop cliffs. Your characters are standing around looking nervous and/or bored wondering why you're not letting them do what they want to do. Ask them. Put two characters together and let them start talking. See what's on their mind. I once discovered the reason a scene was stalled out was because a secondary character was seriously pissed that his best friend had blown him off for a woman (and the plot) and was therefore refusing to do his part to continue the story. I set them down over a few beers and let the friend lose his cool and, lo and behold, my main character had the unhappy realization that he could be a self-absorbed prick. It was a nice touch of dimension that I wouldn't have really seen if I hadn't let them talk it out.

3.Write something completely insane.
True story: a friend was stuck deader than dead in the first third of her book. She could think of no logical way to jump start the next phase so she had a monkey fall out of tree onto her main character's head. In the middle of a city street, no previous mentions of monkeys, no apparent reason it happened. The character, understandably, screamed and swore and the monkey peed on her and ran off. After that, the character recovered and the story continued. Needless to say, the monkey scene was cut (after many hysterical readings of said passage) and the story continued. It may not work for you, but throwing in something nonsensical can take the pressure of deathless prose and breathless plotting off of your mortal shoulders.

We've all been there. I'd love any tips you could share.
Posted by SG Redling at 10:35 AM

Talk it out. I've found that some good conversation with a trusted friend (real talk, not in the book) will resolve places where you are stuck. It forces you to defend what you know you want the book to say but are having trouble actually writing it.

I like these! I think that "vast wasteland of white page" can definitely feel confining sometimes -- because there is TOO MUCH to choose from. Kinda like when you go to the store to buy mustard, and there's forty-eleven possible choices! It's paralyzing.

I think it always helps to do those "this doesn't really matter" types of scenes. (The monkey one sounds priceless!)

Recently I did a blog post where I put my hero on a talk show -- it was a fun way to interview him and have HIM talk about the story. So that might help others get unstuck. :)

When I've searched all the musty, cobwebbed corners of my imagination and still can't come up with a way for my character to get from Point A to Point B, I pose the question to my writer friends on Facebook and let them search the cluttered niches of their own minds for a solution. It's never failed me yet!

When I've searched all the musty, cobwebbed corners of my imagination and still can't come up with a way for my character to get from Point A to Point B, I pose the question to my writer friends on Facebook and let them search the cluttered niches of their own minds for a solution. It's never failed me yet!

I just caught up on all the great blogs entries I had missed. WONDERFUL! Make me feel like...writing!

I needed that. I've been mired in research as i've been building the characters in my novel. I almost pitched my work.

Time to get on with it. :) Thanks Sheila!

Thanks for adding to the list, everyone. I especially like the idea of talking it out in real life. I find if I have to really defend it, I'm usually missing something. I still say, though, you can't beat a monkey. So to speak.

I want a monkey in my book, too! Or a lemur? The kind that fly around trees, raise their tails and shoot pee across the jungle? Yeah, that kind.

You have given me some great ideas. Characters chatting over a beer? Or a biscuit? Great post, Sheila!

creatures shooting pee across the jungle??? Julie are you sure you're not really Sheila???

When get completely and totally stuck, I tend to do something like this:

and then jumping into a scene I'm feeling a little more able to write. I have tons of notes to myself in all caps throughout my first drafts, and a lot of them are reminders to fact-check or look up a name or date, but many of them are placeholders until I feel ready to write a particular scene.

YS1 - see? I'm not the only one that occasionally relies on things that pee across open spaces. Hater! ;) And Sarah, that's a nice one to fall back on. I use that a lot in NaNoWriMo "and then a bunch of stuff happens and..." and sometimes that stuff is monkeys. Or lemurs.

Thanks for a great post. I'm currently visiting the "vast wasteland of white page" but I don't intend to stay long! I hope to use some of your suggestions to get me back on the road home.

I love the monkey falling on her head. Hilarious! I'll have to remember that one. And thanks for cmmenting!

What will be really funny is if, in a year, all the agent blogs are complaining about the new trend of falling monkeys in all the submissions! Screw vampires, bring on the falling monkeys!

Perfect timing on this post for me. I've been stuck for almost two (!) weeks and need to figure out how to get unstuck. Love the monkey idea. Might have to try that today... it's sure to be fun, regardless!

I have got to be dumb, but I have 10ft tall, multicolored, neon, blinking, talking grass, and I'm still stuck.

Great suggestions for us pansters! Thanks, Sheila--wish the monkey would have stayed in the story--you know, a HEA for the critter. 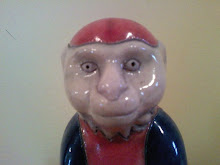 Who really writes this thing?